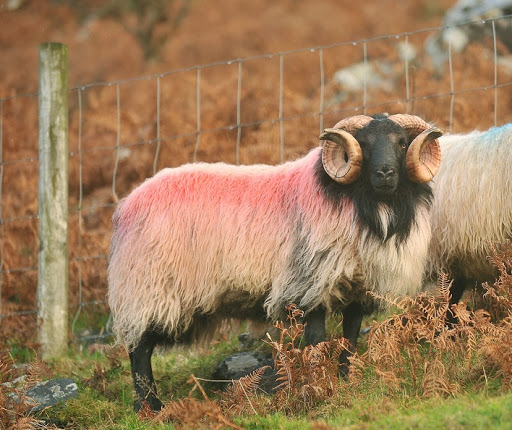 Tom Staunton lives in Toumakeady, Co. Mayo on a picturesque location overlooking Lough Mask. With his wife Maura he reared six children, three boys and three girls. Farming has provided the main source of income since Tom took over the family farm in 1980. Income is also supplemented by agri-tourism. Over the past 35 years, much of Tom’s time has been devoted to innovative ways of maximising the returns from his business and for other farmers in his community.

Tom keeps 350 Black Face Mountain ewes and 90 replacements. He also has a flock of 20 Blueface Leicester ewes which are used to produce rams for sale. When replacements and rams are included this leaves a stocking rate across the whole farm of over 7 ewes per hectare. The ewes on the farm are Mayo cross Lanark type. Ewes are usually scanned about 70 days after ram turnout and typically scan at 1.6 lambs per ewe mated. However, the ewes that do not show up as in lamb at that stage are separated and allowed run with a ram for a number of additional weeks. This gives an extra crop of lambs and increases the overall lamb crop for the farm.

The main sheep enterprise on the farm is the production of Mule ewe lambs. These are sold at special sales organised in the area. Tom produces well-grown lambs to reach 45-50kg liveweight for the breeding sales in August. They are than sold for breeding in their first year and consistently command a premium price. Male lambs are castrated and the weathers are sold as either forward stores or fattened and ready for slaughter.

When it comes to running his sheep enterprise on his own farm, Tom identifies a major focus as being the production of ewes that have lots of milk, giving the lambs the best possible start in life. He takes great pride in the livestock he produces and is happy to stand over his produce. He believes the information that is now available through recording with Sheep Ireland will make it easier for him and other farmers to identify key maternal traits over the coming years. This will help farmers make better and quicker genetic gain than was possible in the past, especially for pure-bred flocks.

Tom has a strong belief in and has been very much involved in group work for many years. He was a key driving force in the establishment of a number of groups as well as an active and committed participant.

In 1984, Tom became involved in a project which aimed to produce quality productive ewes for lowland sheep farms. The project was supported by the Department of Agriculture and ACOT (now Teagasc). The local Mayo Blackface ewes were mated with Bluefaced Leicester rams. A special sale was organised to sell the female progeny. The initial sales had approximately 100 specially bred ewe lambs. The Department of Agriculture remained involved for four years. After that, the project was handed back to the farmers with the assistance of ACOT.

The reputation of the breed has grown steadily over the years. Annual sales are now approximately 4,000, including ewe lambs and ewe hoggets. These take place at Aurivo Mart, Ballinrobe on two separate dates during August and September each year. These sales are recognised all over the country for the high quality of breeding stock that is available for purchase. In 2014, breeding stock was purchased by buyers from 20 different counties throughout Ireland.

The Mule / Grayface group is run by a strong dedicated committee who meet regularly. They use every available opportunity to promote their produce taking sheep for display at shows such as Tullamore, Clonmel and many other shows. They also regularly feature in local and national press as well as local radio. They maintain accurate records of all buyers at sales and these buyers are invited back to the sales organised the next year. This group celebrated it’s 30th Anniversary last year (2014) and are proud to be selling a high value product worth a premium of €40 to €50 over their male counterparts.

While Tom’s primary enterprise is the production and sale of quality breeding stock, he also produces a significant number of lambs for slaughter. These include the male lambs plus the females that don’t make the breeding grade. Tom’s concern about farmers not being adequately rewarded for producing top quality lambs led him to join with some like-minded farmers in 1987 to establish the “South Mayo Lamb Producers” Group. This Group currently have 186 members. They supply over 12,500 lambs annually. There is an active committee of 12 members who negotiate a deal annually for the members. Through this group, farmers receive a better price through quality bonuses and subsidised transport costs. Farmers regard this as a very convenient method of selling lamb. Other benefits offered by the group include negotiated deals on the purchase of concentrate feed and a co-ordinated approach to selling pet lambs.

In 2004 a separate group, “The Mayo Mountain Blackface Group” was set up. The group was initially setup to provide buyers of blackface sheep with a sale that offered quality sheep in substantial numbers. The sale has grown over the years selling 1800 females at premium prices in 2014.The group has diversified and grown to 240 members in the group selling 14,500 lambs annually. Areas addressed by the group includes markets for light hill lambs, finding buyers for store lambs for further feeding, selling lowland factory lambs , and sales of pure-bred Mayo Blackface females as replacements on lowland and upland farms throughout the country.

The group cooperates with the Mayo Connemara Blackface ram group established in 1961, where they have their annual sale with the breeding sale on the last Saturday in September.
This group operate under a strong committee of ten members. Similar to the Mule / Greyface group a premium price is being achieved for breeding stock put through this group. The group aims to ensure farmers work together with a common goal of producing quality breeding stock. They strive to promote the Mayo Blackface mountain breed as a purebred ewe and as a dam for producing crossbred ewes for lowland farmers.

There is a MALP programme run by Sheep Ireland in the area that along with The Mayo Connemara breed recording programme, both working with members and non members to enhance protect and improve the native sheep in the region.

The three groups identified above operate under one umbrella known as the “Lake District Sheep Producers”. This group provides administrative support, with two staff being employed each with 19.5 hours per week giving a total of the equivalent of one full labour unit. This initiative is funded by a Rural Social Scheme (RSA). Furthermore, an office is rented which is funded by farmers in the group. Staunton is confident that this office and clerical support is a major key to the success of the groups and pays great tribute to the staff involved.

Tom identifies a number of key factors that lead to the success of all three groups.

• Quality stocks are produced. An emphasis is placed on having ewes in good body condition.
• Farmers take pride in the stock they produce and are happy to stand by their produce.
• A strong commitment from investors is a must. To ensure this continues, rigorous rules are set out and strongly enforced.
• Each group has a strong committee in place to drive the activities of the group, leading to approximately 500 farmers being satisfied due to a good service they receive.
• Detailed analyses of each members lambs and what they produce.
• Strong marketing effort, with accurate records being kept on all buyers.
• Regular use of media and other opportunities to promote the produce.
• Keeping abreast with technological changes including having an internet site for all three groups.
• People involved must like the enterprise they work in, if they are to remain committed to it.

Important factors for the future

Tom identifies a number of key factors that are important on an on-going basis and into the future. These include:

• Strong leadership on the committees with key people needed to drive the groups.
• Innovation is important, with vision to identify new opportunities.
• Mistakes will be made but it is important to learn from these mistakes.
• Members and especially those driving the initiative must not become complacent.
• Focus on constant improvement.
• Treat all members equally.
• Help members maximise production at farm level. To this end the adoption of technology is encouraged at farm level. Strong support from Teagasc in terms of technical events is encouraged and welcome.

Tom identifies a number of key areas that need to be addressed into the future. This includes issues that farmers should deal with at individual farm level, as well as group and industry issues.

At farm level a lot of progress can be made by improving grassland management. Mineral imbalance such as cobalt deficiency needs constant attention. Many sheep farmers have sheep sheds on their farms that are used for relatively short periods of time during the year. These sheds could be used effectively to deliver a financial return by fattening store lambs indoors on concentrates. Recent research work at Teagasc, Athenry provides good guidance on what is achievable. These lambs could well be home produced lambs that the farmer usually sells as stores, or they may be lambs the farmer buys in as stores for further feeding. Labour is always an issue on sheep farms. Farmers should address this by improving fencing and providing proper sheep handling facilities. Schemes such as Targeted Agricultural Modernisation Scheme (TAMS) provide great opportunities and farmers should take advantage of them

Better dialogue between farmers and the meat industry, including processors, supermarkets and other customers is necessary as farmers need greater certainty regarding price they expect for the product they produce. Greater diversification and product development to make lambs meat more attractive to younger consumers is required. Opportunities to exploit niche markets must be explored. Research is required to explore the effects of different diets on meat quality. Greater co-operation between lowland and hill sheep farmers and cattle farmers is required with greater potential to exploit available grass for fattening lambs.

Income from hill sheep is limited, especially where the amount of available lowland / grassland is limited. Much work is needed to maximise the output from these limited resources. However by maximising output through careful management and with a full industry working together the future can be much brighter for everyone.